My second attempt at felting was a miserable failure. I can't even take a picture of the result of the felting because the bag was stuck together like glue. It was bizarre. Steve and I tried to pry it apart but it was melted or fused together. I am obviously doing something wrong but I'm too frustrated and disappointed to try to work through what that could be. I started knitting a ribbed cap, so no blocking or felting required.

I made chili on Sunday night, and it turned out yummy. Pictures were taken but they don't look so appetizing so I will spare you. Last night was sweet italian sausage and peppers and onions. So far, so good. I'm not doing anything fancy but I have learned that using fresh produce does make a difference. For example, using real garlic instead of the stuff in the jar or, even worse, garlic seasoning, has a definite positive impact on the taste of the dish.

I cannot stop taking pictures of my cat. I played around using digital macro on my camera and managed one cool picture of Delilah. 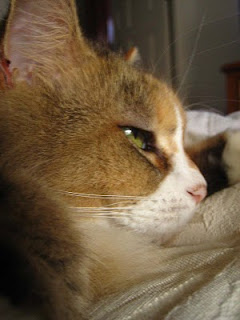