I'm still working on that perfect fitting hat. I think I've mastered adding a color; I made this hat with pink stripes. Delilah is admiring my work. 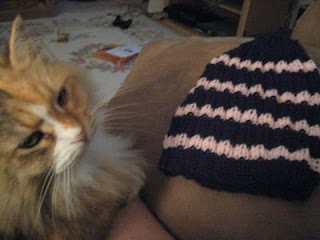 I just don't know when to stop knitting. The circumference of the hat is good but the length is too long. So my fat head requires a total of 76 stitches but the body of the hat needs to be less than 7 inches. 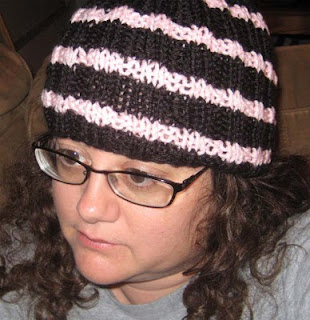 I'm not an optimist at heart but I have a really good feeling about 2010. I started out the decade in a relationship that I thought would define the rest of my life. That premonition came true, but not in a good way. I've been recovering from that six-year relationship for a while now. In this decade, I experienced, and came to respect, karma. However, I finally feel like I've paid for all my past sins and transgressions. I'm going into 2010 on my own terms and, for the first time, I trust myself to make the right decisions.
at December 29, 2009 No comments:

This graphic represents a summary of the words used in my blogging, the larger the font, the more frequent the word use. It was created by Wordle. It's not a surprise that the largest word is "Delilah".

I actually made something for my co-workers for Christmas. Although I briefly considered making a knitted gift (found this really cute knitted lump of coal, did you see his name is Grumpy? Ha!), but I didn't really have the time or the stamina to knit five gifts.

Then, I remembered a sweet snack called White Trash Mix, which I was introduced to at office party years ago. There are a ton of variations of the recipe out on the internet, but the way I remember it (and how I made it) is:

1. Melt 1 package of Almond Bark in microwave
2. In separate large bowl (sprayed with Pam), mix 2 cups of Corn Chex, 2 cups of Cheerios, half of bag of pretzels, a bag of M&Ms and one-half of a can of party peanuts.
3. Pour the melted almond bark into the dry mixture and fold in carefully.
4. Spoon out mixture onto wax paper and allow to cool and harden.
5. Once cooled, break up into pieces and keep in airtight container.

I ended up with enough for gifts for five co-workers and an extra bit for home. Here's a picture of what is left. 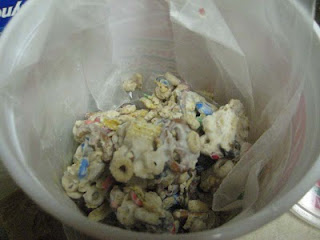 I also tried my hand at peanut butter fudge. However, I feel like I cheated because this was the easiest and most simple recipe possible. It turned out pretty good, but I have a lot left over. I love peanut butter so much, but this stuff is very rich I can't eat too much without feeling bloated. 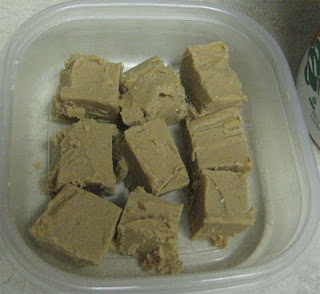 I packaged up my White Trash Mix and Peanut Butter Fudge and gave them out in cute Christmas-themed chinese take-out boxes from Michaels. I was pretty satisfied with my efforts and I was confident that my co-workers would like it. We had decided a few weeks ago that we would not be extravagant in our gifts this year due to the economy and knowing that most of us were not in a position to spend a lot. This was especially true because we did not get Christmas bonuses this year. Only one person went overboard (in my opinion) and got everyone gift cards from Outback.

I made another knitted cap; I would imagine this is called a skull cap. I just love the pattern on the crown of this hat. This variation has two small stripes, so I can practice adding colors. I'm pleased with the results; I have some black and pink yarn I want to use next but I would like to include more than a stripe. I would love to do hearts or something feminine. I'm searching the web and Ravelry for patterns. 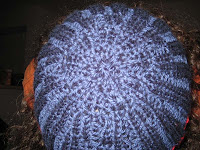 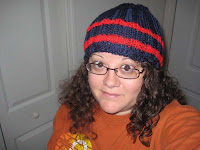 When There Aren't Any Directions, I Overcompensate

Until now, I've skipped over patterns that require color changes. If any of my previous knitting had different colors, it was because I was using variegated yarn. While browsing the forums on Knitting Help, I came across an easy pattern for hats. They recommended adding a color to give it some character. So I rummaged through my mish-mash of Michael's yarn and found some blue and red worsted weight yarn for my project.

The instructions for the simple 2x2 ribbed hat were minimal, and the hat knitted up really quickly. I searched the internet for the best way to add color to knitting in the round, and I declare my first attempt a success. However, I made two mistakes in the main color knitting. I dropped a stitch at the beginning and had to go back and weave some additional yarn in there to cover up the hole (you can see it in the picture in the lower left-hand corner). Additionally, I messed up the ribbing for about 10 stitches (not visible in the picture since I made sure that was on the side you don't see).

The other huge error on my part was making it too longer. The pattern only gave guidelines ("work for 7 to 9 inches"), so I knitted the maximum (number of stitches in round = 88 and length of knitting = 9 inches). As you can see by my modeling of the cap, it is way too big. I am searching for someone with a huge noggin, because even with my extra big head and fluffy hair, I'm still swallowed by the hat.

However, I'm not letting this get me down. I've already started a new hat, with fewer stitches (76) and I'm not going past 7 inches in length. The requisite red stripe will be present in this second attempt. 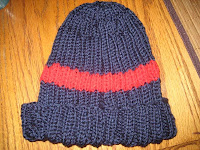 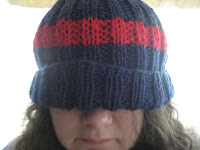 Today is my 39th birthday. While brushing my teeth this morning, I looked at myself in the mirror and thought about myself at 19, and tried to remember if what I am at 39 is what I pictured then. I couldn't remember. At 19, I was dating my ex-husband, working at an engineering firm and attending community college. Now, I'm divorced for almost 8 years, working for an attorney, and enrolling in graduate school.

One benefit of being 39 is that I've got a lot of experience (and, not that *kind* of experience...get your mind out of the gutter :p). I analyze situations for solutions and I have trust in myself to get things accomplished. I'm not afraid to ask questions when necessary.

I do not mean to imply that I have found inner peace. There are many aspects of my life that I think require a ton of work, and I have difficulty motivating myself for issues related to my personal care (emotional and physical).

I have repaired my relationship with my parents and I have a deep respect for my younger brother, who I am proud to point out to people that we are related (although I am not so sure he can say the same).

No matter how much I want to, I'm not going to annotate my resolutions or plans for my 39th year. I'll just build them up in my brain and report on them as I feel necessary.

I actually have a Christmas tree this year, complete with real presents around it (not underneath because I'm in a small place and this is a table top tree - complete with fiber optics). One picture is with the flash (no lights) and the other is sans flash (fiber optics glowing). For the first time EVER, I realize how quickly Thanksgiving turns into my birthday turns into Christmas. 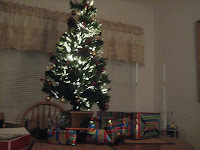 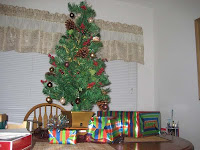 I neglected to blog about the fact that Delilah is now my roommate. The neighbor who owned her left me a note on my door that she knew Delilah had adopted me and that she wanted her to be happy. So, long story short, Delilah now stays with me, and my neighbor has visitation rights. 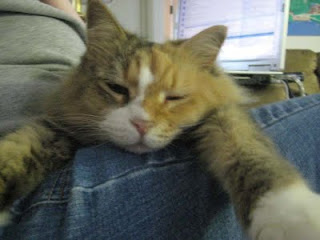 Delilah loves the outside. She howls at the door to be allowed to leave. She seems to be pretty good about hanging around my building. Of course, I still worry that she could take off or someone could take her. Our relationship is still pretty new, so I cave in and give her outdoor time, but only when I'm home. If I'm at work, she's stuck inside. Lucky for me, she just uses that time to sleep.

I'm working on a scarf, using up some really weird yarn I bought a year ago. The yarn is dark gray in color, so I figure this will be a man's scarf. Now I have to find a man that needs a scarf. 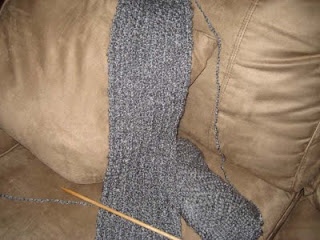 My 39th birthday is one week. I'm working on reasons why this should make me happy and not depressed.
at December 06, 2009 No comments: