Does Walking to the Mailbox Count As Exercise?

I am so lazy on the weekends, or at least that's what it seems like.  Actually, I think it is more accurate to describe my weekends as "a body in rest, stays in rest; a body in motion, stays in motion".  Today, I am definitely in motion.  It's not that I did anything extraordinary, and actually it is a rainy, overcast day, but I managed to prepare two casseroles, one for the husband and one for a co-worker who just had surgery, complete the laundry, clean the kitchen, and make chicken for stir-fry tonight.

After I finish this blog post, I'm going to go back to knitting my sweater wrap, which has been on my needles since forever (February of 2010).  I have about 12 inches left to knit on it but it feels like I have a mile to go.

I also finished my thank-you cards from the wedding.  I have two left to do, and they are for my bosses at work.  Of course, I only had a few stamps on hand but I'm sure I have a few extras in my purse.  In fact, I found a stamp stuck to the hand lotion in my purse.

Just about the only thing that isn't making me satisfied is my weight.  I gained very slightly last week (I attributed it to the wedding) but I am not feeling the love this week either, even though I'm on plan.  I hope I'm just maintaining and that I'm not actually gaining weight.  I would hate to start the holidays this way.

I've been bugging Mr. Grumpbump to buy me a EA Sports Active 2 for the Wii.  I actually used Active and I should probably just start using it again until I get the latest and greatest version.  In fact, if I'm being honest at all, I need to start exercising in order to see results on Weight Watchers.

Possible good news regarding my cats.  Although they do not hesitate to hiss at each other, there have been developments that offer promise and hope that one day these guys might be friends.  On three separate occasions, Delilah and Macy have been on the same couch without incident.  Typically, these two just steer clear of each other and do not share the same space.

We can always count on Delilah to provide drama in our lives.  She has now taken to napping in the dryer, if we leave the door open.  Mr. Grumpbump is guilty of this as his idea of doing laundry does not include taking the clothes out of the dryer and putting them up.  Instead he just uses the dryer as additional clothes storage.  And, of course, Delilah takes full advantage of that.

We still have no word on our house purchase.  I am getting depressed that we might not close before the end of the year.  With only three working days this week due to the Thanksgiving holiday, I am sure we will go yet another week without much news.

I made vegetable soup today.  Nothing fancy, just a bunch of vegetables I bought at the Farmer's Market this morning.  My goal was to make something very weight watchers-friendly.  It's not exactly zero points (I added chicken stock and whole-wheat rotini) but it's still relatively okay for my new eating plan.

I have not lost any weight this week.  I've splurged too much and I'm afraid to get on the scale.  I have to get out tomorrow and do some exercise, just to justify the extra intake.

Back to the soup, the good news is that it smells really good.  I'm having a bowl of it right now, but it's too hot to eat so the verdict will have to wait.  I made it in the slow cooker and you really can't screw up crockpot food.

Macy and Delilah have exciting news.  Two members of their staff, the ones who provide Delilah and Macy with food and water and love, got married on Thursday, November 11.  Yes, we are very happy.  We are now Mr. and Mrs. Grumpbump.

We had a few guests to our house on Thursday, and, honestly, we were most worried about Macy.  She's still edgy about sudden movements or loud noises, so with everyone in the house, we were convinced she would hightail it to the safest place in the house, under the bed.  We figured Delilah would just ignore everyone and go about her business.

Macy definitely surprised us, in a good way.  While she was not social, she was not shy about walking around all of the new people in the house.  She did not run and hide but stayed out front in her normal positions by the  window.  Delilah hung out in the bedroom and ignored us.  After the wedding, when we got home, we thought all was normal.

That was a big mistake.  Delilah might not have acted out while company was here, but she certainly let us know later that she was over us.  We let her outside, as is the normal routine but she never came back.  After several hours, I went outside to look for her.  She was nowhere.   I had Mr. Grumpbump go look for her and Delilah typically will respond to his calls.  Again, no sign of her.  Of course, I get upset.

Then, around 11:00 p.m., our phones rang.  It was a neighbor calling us to say Delilah was at their house, which was at least five buildings away.  Jeezo'man, I was relieved but also embarrassed because a lot of people have definite opinions about cats wandering around.  Mr. Grumpbump and I walk over to the house and sure enough, Delilah is hanging out and talking to the neighbors.  After introducing ourselves, we explain that Delilah has been like this since we've known her and we do have a collar (with our phones numbers) for just this reason.  Mr. Grumpbump called Delilah to come to him and she headed his way.  However, she then made a beeline to the next house, yelling at us and warning us with her tail swishing that she wanted nothing to do with us.  We cornered her and I picked her up; Delilah was howling at me the whole time, definitely unhappy that we were taking her away.

I was even more upset as Delilah has never acted like this before.  Sure, she doesn't always stay right around the house, but she has never before been unhappy to see us.  We had her inside that night for about 10 minutes before she started howling and crying to leave again.   We let her out.

I'm not sure when she decided to come back in but later that night, I woke up and Delilah was in bed with us, as normal.  My concern was elevated because that next day, Mr. Grumpbump and I were gone for the whole day and were staying at a hotel that night.  I called a friend of mine, who agreed to stop by and look after the cats while we were away.  Delilah was in the back of my mind all night.

When we got back from our trip today, Delilah was in our bed, sleeping, not concerned about anything.  I felt pretty silly about working myself up and convincing myself that Delilah was leaving us.  Macy was awake and alert.   Macy has so many good qualities and I'm sure that her sensitivity will wear off as she gets more and more used to us.  She already is very good about sitting with us on the couch, and she talks to us all the time.

Delilah is my fickle, quirky cat, and her indifference to me makes me try harder to control her.  Of course, this equation equals failure.  In fact, as I type this, Delilah is out roaming the neighborhood, while Miss Mace sleeps on the couch behind me.

When our guests were here, Mr. Grumpbump left the door open and Macy actually walked four steps outside.  We all panicked and followed her, calling her to come back.  Lucky for us, Macy is smart and knows that the home she has means constant food, water and love.  She took her four steps of freedom and turned around and came back in the house.


When we get our house, Mr. Grumpbump is concerned that Delilah will be hard to train to stay around.  If we get the house we want, Delilah might just be forced to be indoors all the time.  If we can convince her to stay indoors, most of the stress associated with her would be gone.  I think our best bet is also to introduce ourselves to our neighbors and let them know who Delilah is.  We will deal with it when the time gets here.
at November 13, 2010 1 comment:

I'm working on another pair of socks.  This pattern is knit 3, purl 1 rib.  It goes well with the variegated yarn of blues and browns.  The sock is rather large on me (as usual).  I could not get a decent photo of it on my foot so here it is on display: 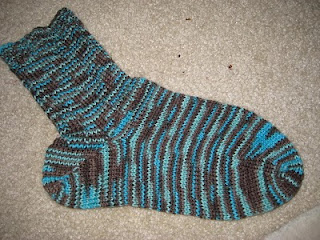 The second of the pair on the needles but I'm slow going on it.  I have been busy lately.
I have lost 10.6 pounds since September 22!  Slow and steady - about 1.5 lbs per week on Weight Watchers.   I've not had a week where I didn't lose weight, although I had one week where I only lost .2 lbs.  Seriously.  What is that?  However, I rebounded the next week with over 2 lbs.  Weight Watchers has really helped me with portion control and eating smarter.  My vegetable and fiber intake has dramatically increased. Now I actually eat vegetables with pleasure.  I have finally reached adulthood!
I'm still waiting for an answer on the short sale offer on two houses.  I would love to have a definite answer from the seller's bank before Thanksgiving, but there are no guarantees.
The cats are doing fine.  They aren't friends but they manage to stay away from each other enough.  I feel like Macy does not get as much as attention, mainly because she is not as pushy with us as Delilah Bug.  Macy is so sweet and does like to sit with us on the couch, compared to Delilah who is usually too busy outside to give a hoot about us.
This upcoming week should be a big change, but I reserve the right to post about it until after the event.
at November 07, 2010 No comments: