Just the thought of knitting is enough to lift my spirits.  I really want to knit a hat right now.  Actually, scratch that.  I want to crochet a hat.  My crochet skills are less than stellar but I want to make a garden party hat - very girly, with a cute band around the crown with a flower or other adornment.  I should be working on my ripple afghan (so carelessly set aside while I worked on the baby blanket), but I really feel the urge to work on that crocheted hat.  We'll see how far I get today.

I've started a new diet.  Today is the last day of the first week.  I don't want to go into much discussion about exactly what I'm doing but this is the basic explanation.  I'm really overweight.  I love food so much and I don't get enough exercise.  I like Weight Watchers because that plan allows you a lot of flexibility.  But, with that flexibility, I was having problems starting it and getting weight off.  So, I've gone to a eating plan that really restricts your carb and sugar intake.  It's like South Beach where you eat more protein and vegetables.  Fruit and dairy are out.   The trick is to get a lot of weight off of me and when I reach my goal, I can transition to Weight Watchers for the rest of my life.  I also have to get an exercise plan integrated into my life.

An attorney I work for has been on the same plan I just started and has dropped 15 pounds in five weeks.  My plan involves being on this plan until the end of October, at which time I should be at my goal weight.  I'm not sure how much I will blog about this plan but it is what is happening in my life right now.  I'm sure I will be more likely to write about it if I'm having success with it.

My first week was hard (without bread! or cheese!) but I made it and there was no cheating.  I'm drinking 100 ounces of water per day and limiting my caffeine.  I've found that the thought of food is almost as good as eating it.  Since I've gained so much weight, I've found that the eating of the food became almost secondary, it was the anticipation of the food that got me excited.  Wow.  That sounds really sick.  But, let's face it, being so overweight is an illness.  Honestly, this time I'm really committed to getting rid of this fat.

Now that there are three cats in this house, I am never permitted to sleep in.  There are all kinds of chirping, meowing, and crying in the house every morning until I get out of bed and feed these beasts.  In the evening, they never bother Mr. Grumpbump (he's usually home before me), but the second I get home there are cats circling me, following me around until I pop open that can of Friskies.   As nice as it feels to be wanted, it's fleeting because once their faces are buried in their cat bowls, I'm but a memory.  They seem to feel more comfortable hanging around Mr. Grumpbump and they find his lap a nice place to take naps.


Mr. Grumpbump has many fine qualities and he's been working on his gardening skills.  He's got a dozen or more plants in his garden now, which has already produced a cubanelle sweet pepper (sorry, no picture, we already ate it!).  Now we are waiting for his bell pepper to fully ripen so we can eat it up as well.

Until his garden gets productive, we are lucky to have a farmer's market every Saturday morning at a local shopping area.  Yesterday I bought Mr. Grumpbump a couple honey bell oranges (his favorite), along with the standard cucumbers and beefsteak tomatoes.  I also got fresh spinach and a head of lettuce.  I'm eating salad practically every night for dinner with my protein choice (the latest selections: tilapia, chicken and buffalo meat, all on separate nights).  We are headed to a warehouse store this afternoon to pick up a variety of proteins to keep on hand so I don't get bored with my new eating habits.  Tonight, we are going out to eat at a sushi restaurant, and I've determined I can eat sashimi (fish without the sushi rice) and a salad (dressing on  the side).  I also believe the miso soup is acceptable because it's made with tofu.  So, I will not be depriving myself at all.   We tried this restaurant a few weeks ago, so I am very confident that they have good quality fish.

I've got to go and start that garden party hat.  Just got to find my crochet hooks.

Everything In Its Place

As I sit here typing this, next to me is a puddle of yarn with a tiger cat laying it in the middle of it.  The yarn is the leftover remnants of my baby blanket project.  Speaking of that, here's the finished project: 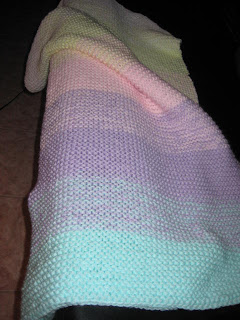 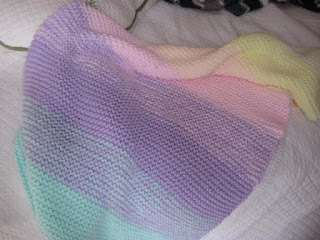 Not my best work, I'm sorry to say.  I felt like there are quite a few "errors" that I tried to fix when the ends were woven back in.  When I looked at the blanket as a whole, my eye focuses on those edits.  The problem was the yarn - it kept getting so tangled.  I spent more time untangling it than knitting.  What I love about the pattern is the gradient, but I think this works best with pastel or muted colors.  The other nice feature of the blanket is the feel of the yarn.  It was baby sport yarn in the first place so by its nature, it's soft. Once I washed this blanket, the yarn really softened up.  I was so happy when it came out of the dryer and the softness was even more apparent.

Our newest cat, Tigger, is a true blessing, if only because he actually uses the various cat accessories that I have wasted money on in the past.  Delilah needs nothing but a bed to lie on and Macy just wants her own corner cat condo.  A reclining scratching post was never once looked at by Macy or Delilah, but Tigger?  He's all over it.  Even though he has no front claws, he will claw at this thing like he's got talons. 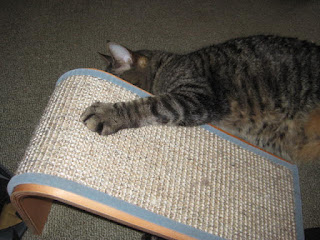 Sometime last year, I bought this cat groom tunnel made by Kong.  I thought Macy might like it, even though I had nothing to back up that assumption.  She might have looked at it once, but it was basically abandoned. Until Tigger arrived. 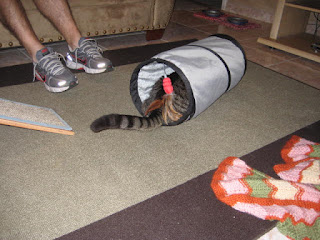 He's a great addition to our house.  He was the cat sleeping next to me as I typed this blog entry.
at March 10, 2012 No comments: