It Doesn't Take Much Time

I lost my knitting mojo for a few weeks, skipping two meetings of my Tuesday night knitting group.  I had no projects going (well, ones I was confident enough in to bring to a meeting).  I managed to knit the back half of a cat pillow, which is shaped like a crescent moon, and started the front seven triangles that will make up the front half.  However, that project looks like Frankenstein's monster knitted it.  The seams are exposed (I was practicing invisible seaming - guess I got an F on that) and it looks like a distracted three-year put the colors together.  That project is definitely for my eyes only.

I tried and failed to start several projects, small ones so that I could feel accomplished quickly and get over my slump.  I wanted to knit so badly, but I could not focus on any one pattern and have enough energy to go find some suitable yarn and needles.  I had knitting depression.

Adding to my distractions was the Monkey Cat.  She's so big now - long and lean. 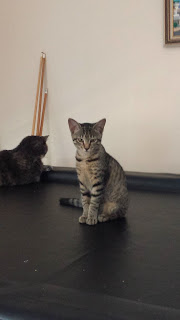 Adding a cat to a household does mean a one-to-one ratio for increased duties and clean up.  Monkey has seemingly doubled my chores.  Much more poop to scoop.  I have tripled the litter boxes around the house to accommodate this kitten.  That's not the only clean up Monkey requires - she loves to drag in leaves, sticks and mulch from the patio into the house.  Mr. Grumpbump and I are constantly asking each other, "What's in her mouth?" because it could be one of the above or it could be a lizard or gecko.  We save about half of the creatures she brings inside. 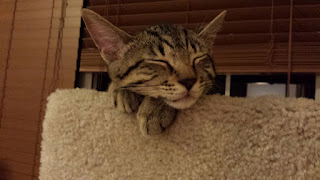 There is no question in my mind (maybe not so to Mr. Grumpbump) but I made the right decision in adopting the Monkey.
at June 15, 2013