The Force Is With Me

Years ago, I bought this Star Wars t-shirt at the Virgin Records store at Downtown Disney (on a side note, I also got a cool Goonies t-shirt at the same time, but my ex-boyfriend ripped up the shirt during our breakup...jerk). 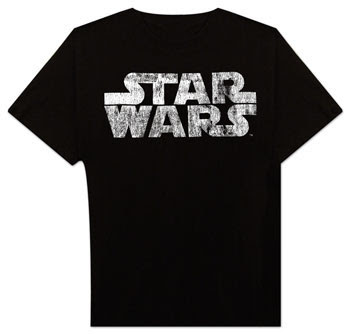 Whenever I wear the shirt, someone comments on it. Typically, it's a guy who says something. I've gotten "cool shirt" or "where did you get it". Today, when I was at Michael's picking up more yarn (which, by the way, I'm not buying any more yarn for at least 6 months.....I have way too much on hand right now to justify any more shopping sprees), the cashier, a young lady, said she liked my shirt but that she had never seen the movies. WHAT??? I told her it was well worth the rental to experience the Force that is the original three films.

The weirdest episode happened while Steve and I were at a pizza place for lunch. Our waiter said he loved my shirt. I thanked him while Steve rolled his eyes. Our waiter told me he felt a connection with me and took something out of his pants.....his wallet (which had the same distressed Star Wars logo as the shirt).
at April 26, 2009