So You Just Figured Out We're In a Recession?

I have to laugh - the top story on the evening news was confirmation that yes Virginia, there is a recession, and we are in the thick of it. I roll my eyes at this news broadcast because while most of the country is just a few months into this ridiculous economy, I've been watching it unfold for about a year and a half.

Around June of 2007, a bunch of mortgage lenders starting losing business and shutting their doors. At that time, I was in the thick of the mortgage closing business so the monthly reports of friends and colleagues losing their jobs was troublesome and becoming more and more commonplace. So now, 18 months later, I'm thinking that I cannot imagine having to put up with this for another four or five years!

The news is also reporting that here in the State of Florida, we are in a serious budget shortfall, and, in order to balance, there are going to be massive state layoffs. Even if you don't work for the State, by now, everyone should realize there is always collateral fallout. Sort of like six degrees of separation, the massive loss of jobs is going to affect you in some way.

Is it too naive to hope that Obama can take this mess and turn it into something that will stimulate the economy and create new jobs? I don't like to put all my eggs in one basket (if you will permit me the tired cliche) but what else can I pin my hopes on?

If we need to go back to basics, then I'm ready to provide for my livelihood with my trade - knitting. I finished my reversible cable scarf - the pattern is so pretty but gets lost in the yarn I choose. No matter. It's warm, thick, soft, and about five long. I've hired myself a houseboy to model my creation (and he comes really cheap because he's a silly old man - but a really good sport, too). Just in time too, because it's supposed to be C-O-L-D these next few days.....well, cold for Florida, which is about 40 to 50 degrees fahrenheit. 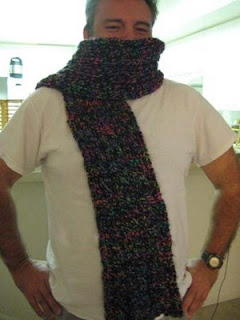