I have to give credit to Holly, who tagged me and inspired me to start posting again. 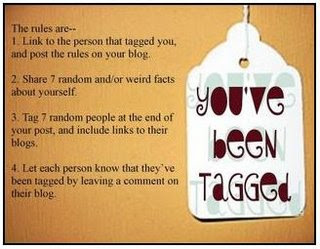 My seven weird and/or random facts about me:

1. I sleep with my eyeglasses on. Eventually I take them off sometime during the night but I really like the idea waking up and being able to see (I realize that this just means I should break down and get lasik surgery....)

2. I love the television show Mad Men. It's on AMC on Sunday nights. I watch it at 10 p.m. and then I watch the repeat immediately after at 11 p.m. (in case I miss anything).

3. Supposedly I saved my brother from drowning when we were very little. I was watching my brother (I was about 6, he was 3) while my parents were swimming in a local lake. My brother went into the water and started to struggle and I screamed for my parents, who got him out of the water. Now no one can exactly remember what happened and there are varying stories (I think I was on the beach; my mother thinks I was also in the water). Before you start getting upset with my parents, remember this was 1976 (admittedly things were a bit more lax) and my brother and I both learned to swim when we were very young.

5. My fondest childhood memories are summer vacations at Anna Maria Island, Gulf of Mexico. I often wish I could go back and re-create those feelings and that time.

6. I believe in karma; I believe I am still paying for the bad things I did to my ex-husband and ex-boyfriend.

7. I believed in Santa Claus, the Easter Bunny, and the Tooth Fairy until the ripe old age of 12. I can still remember the exact day I found out the truth; I was devastated.

I don't know seven people with blogs; can I just owe you for the other five?