Outnumbered Two to One

Two weeks ago, we welcomed cat number four to our house.  For whoever is keeping score, that's felines 4, humans 2.  And Mr. Grumpbump did not have a choice, or a chance.

Number Four is a black and white tuxedo female kitten, approximately 2 months old. That makes Mr. Grumpbump outnumbered Five to One in the females vs. males demographic.

Mr. Grumpbump was fairly annoyed with me, and he essentially did not want to deal with the kitten. But this story has a good ending.

First, let's see how adorable this kitten is: 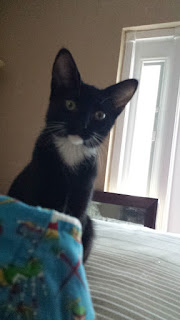 Her name is Flower, after the skunk from Bambi. 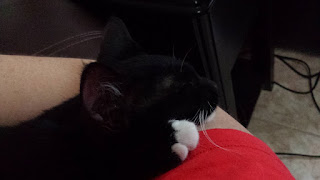 Also because the white tips of her front paws remind me of petals on flowers.

After two weeks, she's got the hang of our schedule and she is allowed to roam the house with the other cats.  Delilah and Macy stay away from her because they are either too old or too shy to deal with scampy kitten.

Monkey, who is only two years old, was at first so mean to Flower.  She hissed and growled when Flower tried to play or get anywhere near her.  I was super bummed about that because I was sure that Flower and Monkey would be great playmates.  I should have just relaxed because within a week, Monkey had a breakthrough and these two chase each other around the house, although it is usually really really late at night.  They are destined to be great friends.

As for Mr. Grumpbump, he has been bitten by the love bug.  I know he likes her because he's given her a nickname, La Fleur.