God Told Me To Quit My Job

July 08, 2013
I have been nagging Mr. Grumpbump for weeks - we need to flip our mattress.  He ignored me for a long time but we finally did it over the July Fourth weekend.  I pulled all the sheets off and was in the process of washing them.

The sheets puddled on the bedroom floor and to my amazement, Macy curled up in the sheets and made herself comfortable.  This is significant only because Macy never comes in our bedroom; it's just the one room that she doesn't feel comfortable.  She only traverses the room in order to use the cat door to escape outside.  Generally, she avoids it because it's always been the domain of Delilah.

So, I helped Macy out by doing all the other laundry and saving the sheets until the very end.  I didn't like the idea of disturbing Macy's new hangout.

After all the laundry was done, the mattress flipped and the sheets back on the bed, Mr. Grumpbump and I went to sleep.

And to our amazement, this happened.  It has never happened the entire time we have cared for Macy.

Macy jumped up on our bed.  And stayed.  This is astounding because Macy has always considered this area to be Delilah's and she would hiss and squirm if you got her anywhere near our bedroom.

And then it got even better.

Macy didn't scatter when Monkey jumped up and the two of them rested as cats do on the bed.  Macy ended up sleeping on the bed with us for the entire night. (Monkey runs around at night and doesn't usually sleep with us.)

We are trying to determine what happened.  It's almost as if a switch in Macy's brain has been flipped and she's got confidence and is self-assured enough to take ownership of a new space in the house.  I'm guessing that it helps that Delilah has abandoned the room too (she did so because of the Monkey).  Whatever the reason, Macy has spent the last several nights in our bedroom.   And when Mr. Grumpbump comes home from work, he finds Macy resting on the bed.

As far as my knitting goes, I'm nearly finished with my latest chevron blanket.  I'm planning the next one before this one is even off the needles. 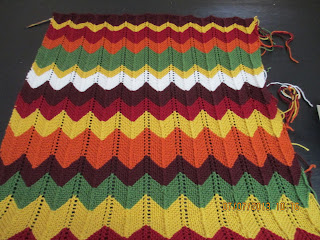 I bought a few books on ripple stitches in order to get some ideas on new stitch patterns.   I'm only relaxed when I'm knitting.  I am convinced this is God's way of telling me to quit my job and just stay home and knit.

Popular posts from this blog

July 17, 2016
I feel remarkably calm.  Of course, I take this as a sign that all hell is going to break loose.  I live my life constantly waiting for the other shoe to drop.  But somehow, this does not paralyze me; instead, I see moving on with my life, such as it is, as a challenge.  And it turns out that I like challenges.

Wait, that doesn't mean that I am ready to rock climb or sky dive, so don't go getting any crazy thoughts about that!  I meant that I made a decision to leave a steady job that I had held for six years, and try something new.  While the new job is not a huge leap from my experience, it is with a major company and I stepped into a corporate world that is foreign to me.  I'm working on a contract basis, and so the end result remains to be seen.   There are benefits to having a short term assignment (less stress, less ownership) and I'm not panicking (yet) about what I might do when the assignment ends.  I can't say a whole bunch about it on here, only because …
Read more

Yesterday I attended a "Learn to Crochet" class at a local yarn store, Sip & Knit.   The class was only $30 and I received two plus hours of instruction (there were only two students in the class, including me, so I basically received one-on-one instruction).  I was totally confused for the first hour and thirty minutes; I felt like I was struggling to get my mind around it and that I was just mimicking what the instructor was showing me.  I didn't know the how or why behind it.

I fumbled around and managed to create a simple crochet border on a knitted swatch.  It was not impressive but I had fun in the class and signed up for another one on the spot (Learn to Knit Continental).  I was intrigued and after I got home, I pulled up as many beginner crochet videos as I could and started practicing stitches.  I was a bit bored with it until I found granny squares.

I ran through five or six versions of the granny square until I finally understood the stitches.  This was m…
Read more

Now that my shawl is complete (yarn purchased during the Orange Blossom Yarn Crawl in March), it is just hanging out in my foyer until I decide if I should gift it to someone or if I'm keeping it for myself.  I think I want to make another one of these shawls (pattern is called Nostalgia Shawl on Ravelry).  While it was an easy pattern, the lacy part required some attention and I think ripped back those sections quite a few times before I actually got it right.


I started working on a crocheted poncho.  Ugh!  I know you are thinking, "Poncho? Not a good look".  I plan to change your mind!  The colors are very nice and the crochet is very....holey?  Is that even a word?  I should have the first panel done very soon and will post a picture.
Lately, my knitting/crochet projects are picking me, instead vice versa.  They appear on my radar, and I am lucky enough to find or have the perfect yarn for it.  Of course, nothing I make is perfect but I'm good at ripping bac…
Read more