Why Can't I Just Leave It All Behind?

We let Miss Macy out of the house this evening.  I put her collar on her and let her come outside.  Delilah was instantly on alert and vocally unhappy that Miss Macy was in her territory.  Mr. Grumpbump and I were not alarmed by this because that is the nature of the cats' relationship.  We were just going to let Macy roam around the house while we were watching her.  Of course, our great plan went up in smoke when a stray dog showed up.  He was a very friendly pup but Delilah the Sentinel was freaking out and bopped him on the nose.   I was so sure in the ruckus that Macy would just bolt.  Lucky for us, Macy ran to her safe zone, which was right back into our apartment.  The puppy, whose name was Timmy, just wanted to play with Delilah.  She was having none of that and tried to slice him several times.  His owner was so distressed by Delilah's hissing when she showed up.  Timmy was a sweet dog but dumb.

I finished my second sock.  So I have the first new socks of 2011.  They are too big, typical of my knitting style.  I am trying to get Mr. Grumpbump to wear them, hoping that they will not be too big for him.  I don't like the ribbing all the way done the leg. 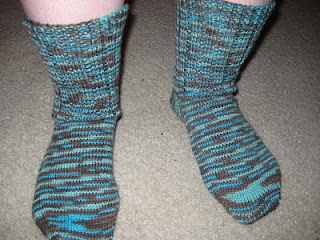 I started a new pair of socks but they are already looking too big!

I am so frustrated by how things are going with the house.  I just hate our apartment so much.  I wish we could just leave her and start over with all brand new things.  I'm at the point where I want to get a new sofa/loveseat or sectional.   Starting over with everything new sounds so wonderful to me right now.  The thought of having to move our cheap, mismatched furniture makes me sick.

My grandmother is going on a week post-surgery.  I'm so glad that she made it through without any significant issues.  She is 85 years old so there will be a longer recovery but I am happy that she has made it through this far.
at March 06, 2011