This is my 100th post! Don't expect too much; I'm weary from a very busy day and I have to get up early and complete a week's worth of work tomorrow.

I finished my sock last night. I will not take a picture of me wearing these beauties until I finish the second of the pair. I really like how it turned out. 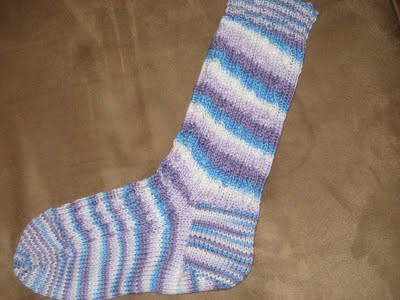 My cable provider recently added several HD channels to the basic lineup. I was excited to see that one of those channels was AMC, which broadcasts my most favorite show of all time, Mad Men. I was excited because I thought that the added bonus of seeing my most treasured show in HD quality would be the icing on the cake. But, last Sunday, when the channel was first available, I watched the show in HD without any more admiration or awe than the week before. (As an aside, the only HD programming I truly appreciate is sports and nature shows - that's where you can really see where HD is kick ass.) Thus illustrating the strength of this show and the quality of the production because I could watch the damn thing in black and white and still be utterly enthralled by it. I think my love of the show is a result of the beautiful but flawed characters and the time period.

The show's third season is currently showcasing 1963, which was certainly an amazing year. The modern women's rights movement is born with Betty Friedan's The Feminine Mystique. And in August, the March on Washington, certainly a milestone in the civil rights movement. And then the sky is about to fall on all my Mad Men characters in November with the JFK assassination. At this point in the season, we are in June of 63, right after the Buddhist Monk sets himself afire in protest (one of the characters watches news coverage), and, ominously, we as the viewers are exposed to the wedding announcement for a minor character, which gives the wedding date as November 23, 1963. I sucked in my breath when I saw that scene. I cannot wait to see how the writers deal with the JFK assassination and how the characters I'm so heavily invested in react to this news. Is it how I felt when 9/11 happened? Like you couldn't count on anything? Everything you just took for granted was all just a facade? I live for Sunday nights and Mad Men.

Wow. I wrote a lot for being tired and needing to pack for vacation. This turned out to be a pretty good post (I feel like Debra Winger in Terms of Endearment - where she has to say goodbye to her children since she's dying and she tells them "I think that went pretty well, don't you?")

What is wrong with me? Comparing my blogging to Debra Winger's death scene? I'm too much.
at September 10, 2009