It's the Economy, Stupid

April 06, 2008
Has the decline in the job market and the economy (seriously, $3.30 a gallon for gas???) made everyone a sourpuss? What happened to being happy for happiness' sake? Of course, this is quite ironic coming from a grumpbump like me. Sometimes I fancy myself an actress and in this way I find it quite easy to pretend to be sweet and happy-go-lucky. Ah, but when you get to know me, I become quite the grouch.

It's just an overall sense that I get when I'm out and about that people seem so self-involved. I blame the economy - as everyone pulls inward to protect themselves. I have so many friends that lost their jobs due to the real estate market slowdown. Businesses we were dealing with a year ago have shut their doors. I've never been caught in such a marketplace before; I've always felt protected from ups and downs of the economy. Not now. Every week at work, I hear a familiar tune about how lucky I am to have a paycheck. Really, it feels like an excuse to make me work even harder. My work ethic is just fine; I don't need some employer twisting head into making me think I'm not working hard enough. My allegiance lies with me first; and I'm not foolish enough to think that my employer has my best interests in mind when making decisions.

The recession talk in the media scares me; I do not feel prepared to face a financial crisis. I'd rather the marketplace correct itself sooner rather than later as I have been feeling the pinch since last year. Perhaps because I work in the mortgage industry, and the lending crisis has been happening for more than a year. It's only recently been getting so much bad press due to the presidential elections. I will do my part for the economy by spending my entire economic stimulus check when it comes in May. I'm hoping Best Buy will have some good deals during this time as I have my eye on a new tv. And I will be very personable to the Best Buy associate lucky enough to deal with me.

Popular posts from this blog

All Over The Place

My blog entries jump around too much; the paragraphs do not flow into each other smoothly. I don't do transitions very well. I'm going to try something new and create a header for each idea, so there is at least a semblance of delineation for the separate thoughts.

Cat News
I took Delilah to the vet this morning. I was completely stressed out by the whole idea. I had to keep reminding myself that I had to make sure that she was healthy. The car ride over was uneventful; Delilah did not make any noises at all. After we got situated in the exam room, Delilah started in with the growling noises and I could not comfort her. By the time the vet tech came in, Delilah was very vocal about her uneasiness. The tech took her in the back room to do lab work and I could hear how unhappy she was. Lucky for us, the vet pronounced Delilah to be very healthy and she tested negative for feline leukemia and feline aids. There is more blood work being done and we will have the results in…
Read more

I'm Not a Prodigy

August 14, 2008
I've been knitting since Memorial Day weekend, which is about 3 months. I love knitting. It's the one hobby (other than reading) that I'm serious about and I haven't given up before I ever really started (Example: Piano lessons - which, by the way, I still have all my books, notes from the four or so lessons I took, and the Casio keyboard I bought. I keep hoping I will go back to it one day. Sure......just like I'm going to lose this weight).

Back to knitting. I feel invested with this hobby but practical in the same vein. I have not bought a ton of yarn (partly due to me being out of work but also because I'm not good enough to buy the expensive yarn). I'm really a novice. Especially when I peruse the knitting blogs and forums out there.

You know what really makes me jealous? Socks!!! People who knit socks. I am in awe over the beauty and the workmanship it takes to knit socks. I could spend all day looking at knitted socks. When I go to the bookstore, I fl…
Read more

What's In It For Me? 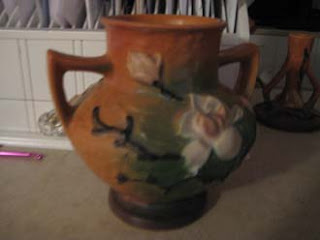 I received an inheritance of sorts yesterday. My mom has been storing three pieces of Roseville pottery that I received from Mrs. Wightman. Who is Mrs. Wightman? She was my babysitter from the time I was in kindergarten until I reached the 7th or 8th grade.

This Roseville pottery is stamped on the bottom. The vase is stamped with "Roseville U.S.A. 180-6" and the candlesticks are stamped "Roseville U.S.A. 1157-4 1/2". A quick search of the internet reveals that this is the Magnolia collection. The pottery is ugly; the colors, the design, the overall appearance. I didn't realize that the relief was supposed to be magnolias until I googled it. I'm crossing my fingers that Antiques Roadshow hits Orlando some time soon. My bequest is only valued at about $400 so I probably will not rate appearance on the tube. Unless, of course, the Hope Diamond was stuffed inside one of the candlesticks. (And, for kicks and giggles, I checked and NADA).